The foot and ankle is a complex tool that has two roles; a shock absorber that contours to irregular surfaces, and a rigid propulsive lever. The ability of the foot to pronate plays an important role in the foot’s ability to multitask (1,2,3). 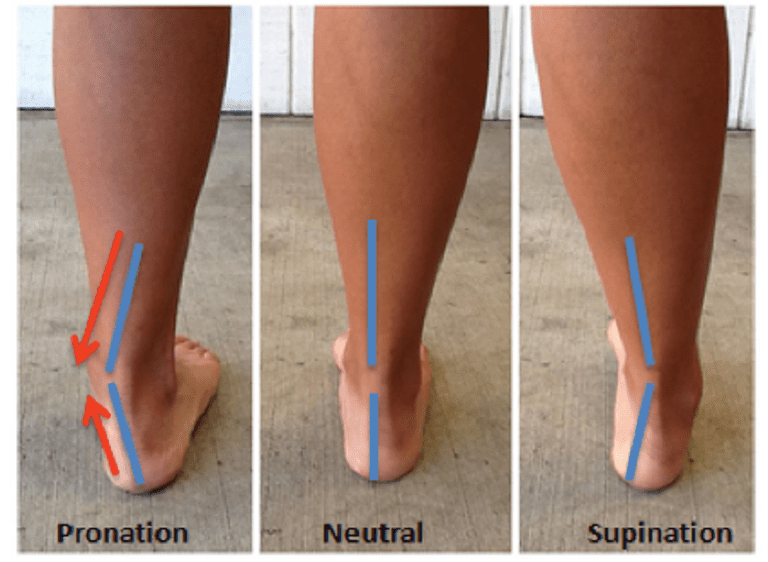 Foot pronation is the combined movement that results in flattening of the longitudinal arch of the foot (4).  In a normal gait cycle, the process of pronation begins at heel strike, progresses through mid-stance and then reverts back toward supination to prepare a rigid lever for forward propulsion (4-7).  In a healthy foot, pronation is limited to approximately 8 degrees (5-7).  Movement beyond 8 degrees is termed “hyperpronation”.

What is the difference between hyperpronation and "flat feet"?

At a glance, they look the same, but indeed they are different.  Hyperpronation is dynamic, meaning that it is during the active process during movement.  Someone who has flat feet is extremely likely to hyperpronate, but it is not necessary for someone who hyperpronates to have "flat feet" (pes planus).

What happens if I hyperpronate?

The repetitive stress of hyperpronation causes significant strain on the soft tissues of the foot. Chronic hyperpronation may result in a pathologic laxity of the calcaneonavicular ligament in the foot and the talonavicular joint. (63) The relatively inelastic medial band of the plantar fascia is often stressed beyond its capacity to elongate, causing irritation in those who hyperpronate (10). Traction from hyperprontion contributes to posterior tibial tendinopathy and posterior tibial nerve irritation (also known as tarsal tunnel syndrome) (11).

Does hyperpronation affect the knee?

Hyperpronation also stresses the knee through a number of mechanisms. In particular, a lowered arch combined with internal tibial rotation places significant  stress on the inside portion of the knee (8).  This challenges the medial collateral ligament and anterior cruciate ligament and is a well-recognized contributor to injuries of these structures (16,17).  Additionally, internal rotation of the tibia and femur cause a relative lateral displacement of the patella, pushing the patellar facet into the lateral femoral condyle (18). Not surprisingly, low arches and hyperpronation are commonly associated with knee pain (19-22).  Longstanding misalignment of the patellofemoral joint is associated with degeneration of the knee (19,22,23).

How does hyperpronation affect the hip?

Not all of the torsional energy of tibial internal rotation is dissipated by the knee. In fact, much of it travels through the knee into the thigh, and is absorbed by the hip (18).  Internal rotation of the femur has a detrimental effect on several muscle groups, including the quadriceps, hip adductors, and hip abductors, such as the gluteus medius (8).  Foot hyperpronation and hip abductor weakness are known biomechanical coconspirators.  In a self-perpetuating cycle, the compensatory changes that occur upstream in response to hyperpronation end up  increasing hyperpronation and vice versa.

How does hyperpronation affect the lower back?

Internal rotation of the femur (hip) causes the pelvis to shift anteriorly (8). This further contributes to “stretch weakening” of the gluteal and abdominal muscles and adaptive tightening of the hip flexors (lower crossed syndrome). This process limits hip extension, which in turn increases extension forces on the lumbar spine facets (8).  What’s more, the functional leg length inequality of a unilateral flat foot may cause lateral bending of the lumbar spine toward the affected side, further increasing facet compression (8).  As expected, hyperpronation contributes to lower back pain (14,25-32).

How does our body adapt to hyperpronation?

The body employs many compensatory mechanisms to offset foot hyperpronation – although these corrections do not come without a cost (8). Foot hyperpronation ultimately causes joints higher in the kinetic chain to absorb more shock (8,20,21,30). The increased load on the knees, hip, and spine is compounded during athletic activity, particularly running and jumping.

Can you have hyperpronation but not have any pain?

While the “functional” diagnosis of foot hyperpronation can present asymptomatically (pain free), it is a well-known contributor to a multitude of painful “structural” diagnoses throughout the lower body.

What is the typical presentation of foot hyperpronation?

There is no “typical” presentation for foot hyperpronation, but the condition should be considered in any person with leg, ankle, or foot pain, particularly those with plantar fasciitis, Achilles tendinopathy, metarsalgia, medial tibial stress syndrome, patellofemoral pain syndrome, greater trochanteric pain syndrome, and low back pain. Longstanding hyperpronation may lead to ligamentous laxity and degeneration of affected joints (19-23,39,40).

How is hyperpronation managed?

The management of foot hyperpronation includes prescribing arch supports as well as exercises to control motion at the hip and ankle (35).  Factors, including the degree of hyperpronation and the functional demands of the patient, will dictate whether custom or prefabricated orthotics are most appropriate. Flexible full-length orthotics have been shown to improve Q angles in patients who hyperpronate and may aid in the treatment of secondary biomechanical problems associated with foot hyperpronation, including foot pain, knee pain, and low back pain (45,46).

However, excess bulky orthotics or shoes with excessive cushioning may have an adverse effect on proprioception and balance (47).

Are leg length inequalities part of the issue?

Should stretching exercises be utilized?

Yes.  Inadequate ankle dorsiflexion may force excessive pronation through the mid foot. Stretching exercises and myofascial release may be appropriate for restrictions in the gastroc and soleus (calf) muscles.

What about strengthening exercises for hyperpronation?

Strengthening exercises should be directed at the foot and hip, specifically the posterior tibialis and hip abductor muscles. Traditional strength training does not necessarily change faulty movement patterns (54).

Exercise programs should incorporate proprioception, beginning with simple balance training like a single leg stance or Vele’s, then progressing to lunges on an unstable surface, like a Bosu ball (55-58).  Strengthening exercises for the hip abductors could include a posterior lunge, clam with band, lateral band walks, or sidebridge.

Inward collapse of the knee, regardless of cause, is associated with ACL injury. Athletes with inward collapse (valgus stress) will benefit from warm-up drills. (59-61).

Are there other factors that affect hyperpronation?

My child has flat feet and hyperpronates, is that normal?

At Creekside Chiropractic & Performance Center, we are highly trained to treat over pronation.  We are the only inter-disciplinary clinic providing services to Sheboygan, Sheboygan Falls, Plymouth, and Oostburg including chiropractic, manual therapy, myofascial release, ART (Active Release Technique), massage therapy, acupuncture, physiotherapy, rehabilitative exercise, nutritional counseling, personal training, and golf performance training under one roof.  We also offer fully customized orthotics to assist patient's in this condition.  Utilizing these different services, we can help patients and clients reach the best outcomes and the best versions of themselves. Voted Best Chiropractor in Sheboygan by the Sheboygan Press.

4. Minkowsky R. The spine, an integral part of the lower extremity. In: Clinical Biomechanics of the Lower Extremities, Valmassey R. St Louis: Mosby, 1996:105.

68. Williams D, McClay I. Measurements used to characterize the foot and the medial longitudinal arch: reliability and validity. Phys Ther, 2000;80:864-871.