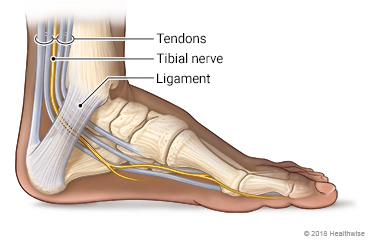 The tarsal tunnel is formed by the flexor retinaculum ligament, which extends posteriorly and inferiorly from the medial malleolus. The tarsal tunnel houses three tendons, an artery, and the tibial nerve.

What causes you to get tarsal tunnel?

Flat feet are one of the biggest risk factors.  There is an almost 30 fold increased pressure with pronation (flattening of the arch of the foot) as compared to neutral position (2). Since over pronation is often present bilaterally, tarsal tunnel syndrome commonly affects both feet.  Other causes of tarsal tunnel include trauma (17%) or varicosities within the tunnel (13%). Inflammation of another local tissue may cause nerve compression.  Alcoholism, diabetes and thyroid disorders may be superimposed on entrapment neuropathies.

Are men or women more likely to get tarsal tunnel?

There is a slightly higher occurrence of tarsal tunnel in females vs males (3). Transitioning from high heels to flats on weekends is suspect.

What are the symptoms of tarsal tunnel?

Symptoms of tarsal tunnel include numbness, pain or altered sensations in the plantar arch and heel. The discomfort is often described as “burning”. Symptoms may increase with prolonged standing, running or exercise. Forty-three percent of people report pain that is worse at night. (4).   Symptoms can occur suddenly from a trauma or gradually from weight bearing overuse type injuries. Symptoms may present as part of the “Heel Pain Triad”: the combination of plantar fasciitis, posterior tibial tendon dysfunction and tarsal tunnel syndrome. Researchers think that a failure of the plantar fascia combined with a failure of the posterior tibial tendon results in a traction injury to the tibial nerve (5).

Do I need testing or imaging to determine if I have tarsal tunnel?

Typically, no.  Orthopedic testing can be performed to reproduce your symptoms and determine the cause of your issue.  X-rays are of no value in this issue unless stress fracture, bone lesion, or exostosis is suspected.  Electrodiagnostic testing is not generally required unless motor involvement is suspected. If necessary, EMG/NCS can help to differentiate nerve entrapment from radiculopathy or peripheral neuropathy. 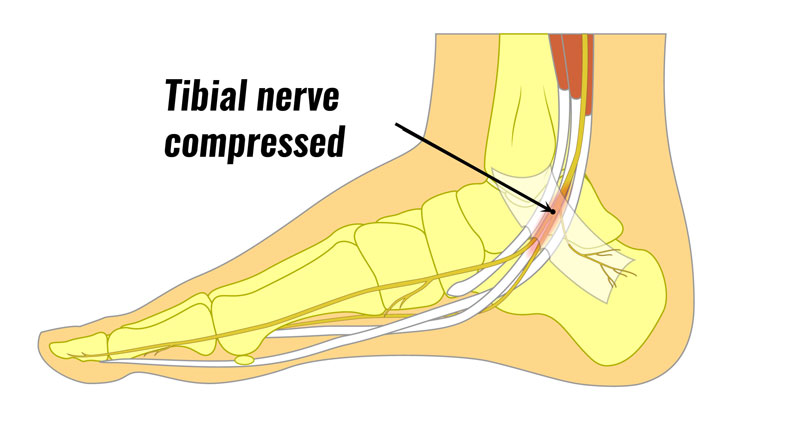 What are the treatment goals with tarsal tunnel?

What type of shoes should I wear?

What types of treatments can you perform at Creekside Performance Center for tarsal tunnel?

IASTM or myofascial release techniques may be helpful to release myofascial adhesions in or near the tarsal tunnel, although some discretion is necessary to avoid further trauma to the nerve. Nerve mobilization is a useful adjunct for improving nerve function (9). Hypertonicity and trigger points in the calf muscles are common and may benefit from manual therapy. Stretching of the calf muscles as well as the plantar fascia can be implemented with prudence as dorsiflexion becomes more tolerable. Strengthening of the tibialis posterior will help support the arch and may be accomplished by having the patient sit with the affected ankle crossed at knee, placing a resistance band over the affected forefoot-secured beneath other foot, and moving affected foot “up” into inversion and slight dorsiflexion. Manipulation may be beneficial to re-establish normal motion to fixations in the cuboid and talonavicular joint, (8) as well as associated spinal segments.

What other treatments are available?

Failure of conservative treatment requires further diagnostic work-up and consideration of referral to a podiatrist. Surgical management may include microsurgical decompression.

At Creekside Performance Center, we are highly trained to treat this.  We are the only inter-disciplinary clinic providing services to Sheboygan, Sheboygan Falls, Plymouth, and Oostburg including chiropractic, manual therapy, myofascial release, ART (Active Release Technique), massage therapy, acupuncture, physiotherapy, rehabilitative exercise, nutritional counseling, personal training, and golf performance training under one roof. Utilizing these different services, we can help patients and clients reach the best outcomes and the best versions of themselves.